Nearly three years on from importing Vino de Montana and Cadalso from Peninsula Vinicultores, there is still no official appellation of origin for Gredos. In recent years, Gredos has received international recognition as a unique wine region, producing distinctive, almost Pinot-like Garnacha. We hope they will be given their own appellation soon, as nothing looks more like a real geographical unit than the Sierra de Gredos.

The area extends into three provinces: Avila, Madrid and Toledo. Located a scenic 90-minute drive west of Madrid, it finds its home in the Sistema mountain range which boasts some of the oldest and most interesting soil types for grape growing in Spain. 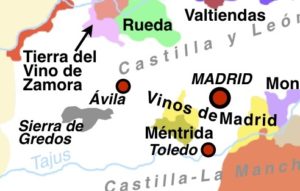 The combination of the soil type, high altitude and old vines result in a quality potential in the area that is phenomenal. It is the Garnacha that seems to be taking centre stage at the moment due to the blue granite soils and high altitude which lend themselves to a lively style of wine that’s very exciting to drink. The area is still home to a number of unusual varieties, most of which aren’t planted anywhere else in Spain.

Unfortunately, many of these remote mountain villages with wine making potential are facing an uncertain future. The wine cooperatives on which they depend are closing down. That coupled with the younger generation moving to bigger cities has left the area in a state of wine-less despair. Fortunately, winemakers like Andreas Kubach of Peninsula Vinicultores have seen this as an opportunity, taking to the area to work with Gredos’ rich and diverse heritage of grape growing.